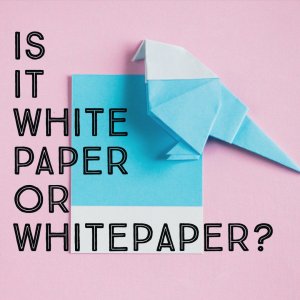 White papers/Whitepapers. We deal with these informative pdfs on a daily basis, whether it’s reading them, writing them, promoting them, or reporting on their effectiveness. For better or worse, they play an important role in today’s B2B marketing.

As often as these digital documents come across our desks, most of us never stop to put much thought into the spelling of the term. You probably have a preference one way or the other – maybe even a strong preference – but have you ever thought about why you choose to spell it that way?

Whether you prefer white paper or whitepaper, your justification is probably something like, “Because that’s the right way to spell it!” And you probably wouldn’t have to look far to find someone with the same justification for the opposite stance.

It’s time to settle this debate. Which spelling is really correct? We’ll compare the two prevailing spellings of everyone’s favorite content format on multiple levels to determine which spelling you should stick with.

As Shakespeare famously wrote, “what’s past is prologue.” History is a good place to start when trying to settle a debate like this. So, where did the term white paper/whitepaper come from?

The best guesses trace the origin of white papers/whitepapers to Great Britain in the 19th century. In this time period, the British government produced and distributed official reports that outlined issues coming up for discussion in Parliament. These reports were called “Blue Papers” or “Blue Books,” named for their trademark blue covers.

If the subject matter for a proposed Blue Paper was too light or informal, it would be printed with a white cover instead. These white-covered reports became known as “White Papers.”

From the British government, White Papers made their way to the United States government. There, they were (and continue to be) used for the similar purpose of outlining and presenting policy.

Eventually, White Papers made their way to the public sector. They found a home among technology companies looking to announce and position complicated new offerings. It’s at this point that White Papers became the white papers/whitepapers that we know today.

The words white and paper were separated by a space throughout their history. If they’re now a compound word, it’s a new development, rather than something with historical precedent.

It’s not uncommon for two words to start out separated and then become a compound word as it becomes more popular in day-to-day speech. After all, it’s not long ago that email was to be written as e-mail or website was to be written as web site. Could this be the case with white paper/whitepaper too?

For many people, a word isn’t really a word until it appears in the dictionary. Beyond that, a dictionary entry is an important step for a term to become widely accepted. Let’s see how white paper and whitepaper are represented in some popular online dictionaries: 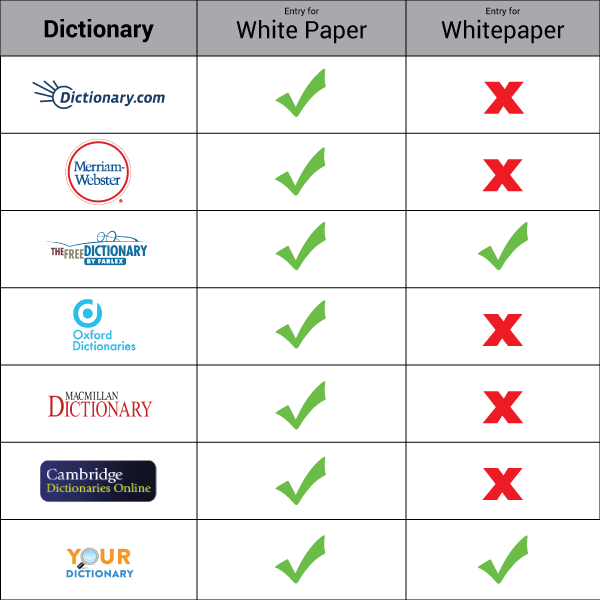 Though respected, dictionaries aren’t exactly known for being on the cutting edge of new terms. It’s not uncommon for print sources to adopt a word before it’s formally recognized in dictionaries.

Because, these outlets often work outside of dictionaries, they use comprehensive, publication-specific style guides to outline which words can and can’t be used. Most style guides use the AP Stylebook or the Chicago Manual of Style as a basis and add their own rules and exceptions as needed.

As far as the issue of white paper vs. whitepaper, the base stylebooks tend to fall on the white paper side. Both the AP and Chicago styles list the two-word version as the preferred spelling.

On the other hand, many technology companies choose to list whitepaper as a company-specific exception in their style guides. Two notable examples of this are HubSpot and Google. HubSpot has a publically available style guide that notes the one-word version as its preferred term. Google’s stylebook isn’t as readily available, but it’s fairly easy to see they opt to use the one-word version throughout their content.

Though white paper is currently the default in style guides, it says something that large (and influential) companies are taking the time to make their own exceptions.

As nice as it is to be validated by a dictionary or style guide, the most important question is, “Which one are people actually using?”

A rough, but fairly effective, way of determining the popularity of term is by checking the number of search results connected to it. Let’s see what the results look like for white paper and whitepaper.

Alright, white paper is currently the more popular term, but what about the trend. Is it gaining popularity, losing popularity, or staying the same? It’s certainly possible for whitepaper to be gaining ground (as is the case in company style preferences).

Luckily, Google Trends can help to answer some of these questions. The “Compare” feature shows you both trend lines side by side. 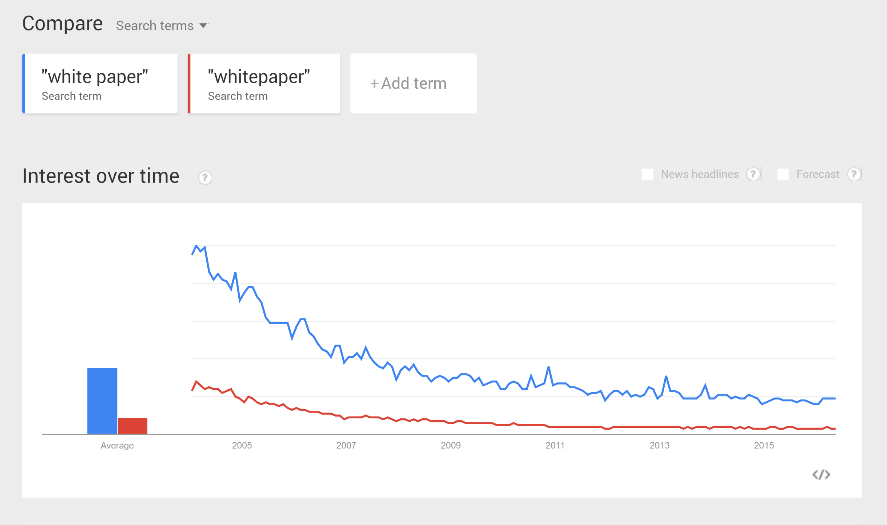 While the whitepaper line might not be as steep as its white paper counterpart, they’re trending in generally the same direction. There’s certainly not any evidence that whitepaper is making any sort of significant push to overtake white paper.

While there are some encouraging signs for fans of whitepaper, white paper is the better choice right now. White paper is more widely used and it has strong documentation to back it up.

Let us know what you think? 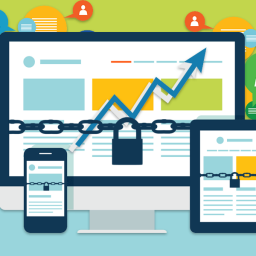 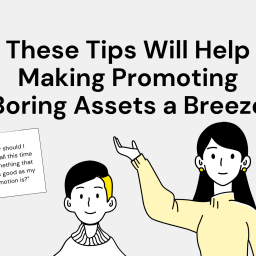 These Tips Will Help Make Promoting Boring Assets a Breeze 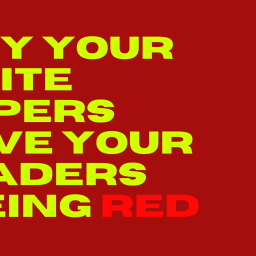 Why Your White Papers Have Your Readers Seeing Red

It’s that time of year again! As 2016 draws to an end, we traditionally take some time to step back…

Very informative. thanks for sharing.